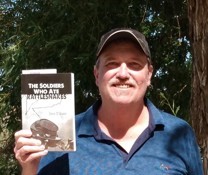 Gary Anderson arrived on the Eastern Montana College (EMC) campus in 1987. Rooted in the rich heritage of central Montana farm country, Anderson chose history as his major. Thanks to the encouragement and support of EMC professors, his interest blossomed into a passion for reading and historical research.

“I had always loved the larger city of Billings and what it had to offer me. I had been accepted to both Eastern Montana College and Rocky Mountain College at the time, and I just felt that Eastern had more to offer me,” said Anderson.

Anderson’s college advisor, Dr. James Friguglietti, became an influential mentor and friend. Friguglietti made such an impact with his kindness and sincerity and true care to go above and beyond for his students that Anderson immediately changed his major to history, now having Friguglietti as his advisor.  Anderson notes “He always made history come alive in his courses. He made a person feel like they were living throughout their past and really made history appealing and truly interesting.” Anderson’s growth as an academic was furthered by Dr. Norton Moses and Dr. Craig Wilson because of their ‘out of the box’ thinking. To this day, Anderson holds strong to his beliefs and ideals he has learned at EMC.

“Because of these men, as well as many other teachers that I have had, I still have the same thoughts and beliefs today – these men went above and beyond, so much more than I could ever convey,” Anderson remarks.

But it wasn’t all study and no fun. One thrilling memory Anderson has was seeing Friguglietti and Moses compete in the national television show “Jeopardy!” – and win! Moses was a regular on “Jeopardy!” The students of Rimrock Hall would plan their schedules around the airing of the show to watch their professors compete on a national level.

Anderson reminisces, “It gave us so much pride that our very own professors were competing. We even tried to compete with each other and our professors on television while watching the airing of the show.”

After Anderson earned his bachelors of arts in history in 1992, he completed a one year internship at the C.M. Russell Art Museum and now calls Great Falls his home. Anderson never dreamed his life would lead him into writing novels. After a horrible incident involving a baseball bat, Anderson suffered from a panic disorder and PTSD, leading to many more concussions in his lifetime. To overcome the effects of the head injuries, Anderson began writing as a form of physical therapy to strengthen his arm and keep his mind sharp. What started as a therapy treatment turned into his next chapter in life.

“I truly want to become a strong advocate of using writing as a form of therapy for mental problems, as well as head injuries,” Anderson explains.

These days, Anderson has applied his passion for reading and research to composing a novel. Writing under his pen name, Dean O’Quinn, The Soldiers Who Ate Rattlesnakes tells the story of three friends who grew up in the Civil War. He was so inspired with what he learned in his classes regarding the many violent riots and situations that caused many of the wars in the United States, especially the Revolutionary and Civil Wars, that he used a lot of what he learned in his books. Anderson also dedicated his inaugural novel to Friguglietti and his second novel is already in the works!

As a historian and writer, Anderson spends much of his time reflecting on the impacts of the past. He’s also keenly aware how those who went before him shaped who he is today. The influences of Friguglietti, Moses, and Wilson are present on every page, which Anderson holds as a point of pride.