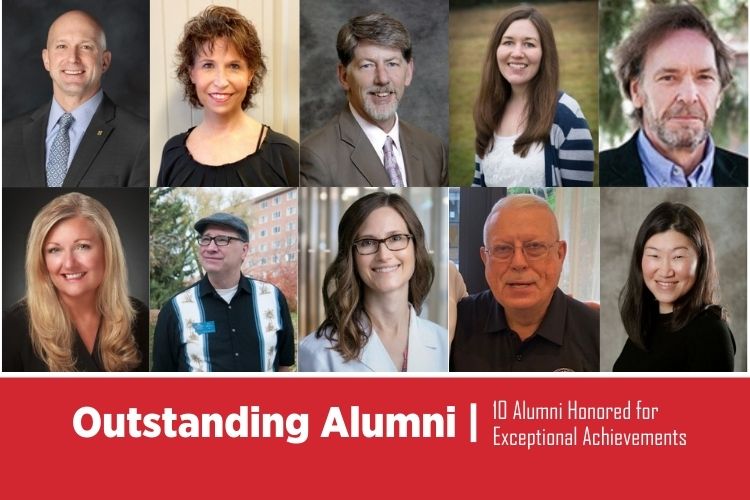 MSU BILLINGS FOUNDATION NEWS—From making breakthroughs in Alzheimer’s research to creating unmatched amenities in a landmark historic hotel, educating future leaders to serve and protecting citizens, MSU Billings (formerly Eastern Montana College) alumni make a difference in their communities, near and far. In celebration of their exceptional contributions, the MSU Billings Foundation & Alumni honors graduates and university advocates with the annual Outstanding Alumni Awards. The 2020 Outstanding Alumni Award recipients come from diverse educational and career backgrounds and are recognized for their achievements with awards in six categories.

Distinguished Alumni Award recipients bring pride to their alma mater through their personal, professional, and civic contributions. Three Billings residents have certainly made MSU Billings proud since graduation. From the classes of 2000 and 2004, Colleen Black is the owner and operator of Colleen Black & Co. Her firm, founded in 2003, specializes in individual and corporate tax, business accounting, payroll, and consulting. Alumnus William “Bill” Duke of the class of 1970 joined the first Reserve Deputy Program in Montana just a year after graduation. He retired from the Yellowstone County Sheriff’s Reserve in 2003 after dedicating his career to working as a reserve deputy. Also dedicated to the betterment of the Billings community is the class of 1995 alumnus, Ty Elkin. He joined St. Vincent Healthcare Foundation as executive director in 2019, following a 21-year career at Yellowstone Bank.

Alumni who are dedicated to the advancement of education and committed to MSU Billings receive Alumni Merit Medallions. The 2020 medallion recipients are Mike Nelson and Donna Fredericks. From the class of 1982, Nelson is co-owner of the historic Northern Hotel in Billings and a longtime member of the MSU Billings Foundation’s board of trustees. Fredericks is also a Foundation trustee and former board chair. She earned an undergraduate degree in 1983 before returning to MSU Billings and receiving a master’s in 2002. A financial advisor at Prudential Financial, Fredericks was instrumental in the success of the university’s Yellowstone Science and Health Building campaign.

Dr. Thomas Regele and Eric Gilbertsen are recognized for their professional commitment to MSU Billings, having dedicated 10 or more years as faculty. Dr. Regele earned a Bachelor of Arts in Spanish from MSU Billings in 1999 and joined his alma mater’s faculty in 2007 as a full-time Spanish professor. Gilbertsen, a math instructor, graduated in 2005 and is widely known on campus for his Prior Learning Assessment work at City College, which helped establish a process to award program credits to students with previous military service or professional experience. Both Gilbertsen and Regele are recipients of the Ronald P. Sexton Award for Professional Commitment.

New this year is the Rising Star Award and the Chancellor’s Excellence Award. 2012 business graduate Jessie Perius joined the MSU Billings faculty after completing her MBA. She is currently pursuing a Ph.D. in marketing through Northcentral University. Also from the class of 2012 is alumna Mandi Graham, a committed volunteer at MSU Billings and many other local organizations. She works at Billings Clinic and joins Perius as the first recipient of the Rising Star Award, which honors alumni with a demonstrated increase in career responsibility, community involvement, or campus contribution.

Dr. Miranda Orr is the first recipient of the Chancellor’s Excellence Award, which MSU Billings Chancellor Rolf Groseth selected. After graduating from MSU Billings in 2002, Orr has spent her career researching the molecular mechanisms of Alzheimer’s Disease. She is currently an assistant professor of gerontology at Wake Forest School of Medicine.

For the third year in a row, the MSU Billings Foundation & Alumni recognizes non-graduates with its Friends of MSU Billings Award for their demonstrated service and leadership and their influence in inspiring others to support Montana State University Billings. The 2020 award goes to Steve Langlas of Langlas & Associates and his wife, Missy, of Billings.

“The MSU Billings Foundation is tremendously proud to recognize our university’s outstanding graduates with these awards. MSUB alumni leave our doors to make a difference here in Billings, all over our state, and throughout the world,” said President & CEO Bill Kennedy. “We look forward to honoring the 2020 award recipients with a socially distanced ceremony and hope the Billings community will join us in congratulating these leaders.”

A list of all winners and categories is as follows: