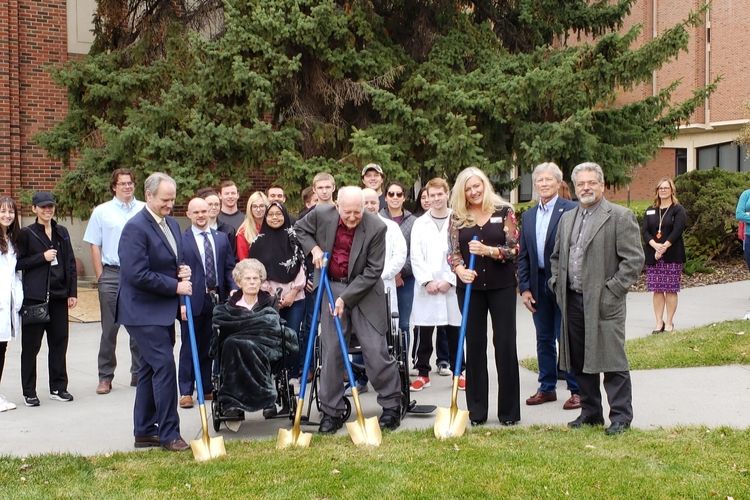 When the university selected TW Clark Construction as the general contractor for the project, Vice President of Operations Shane Ridley’s bid came in $1.5 million higher than the approved budget for the building expansion and renovation. To reduce project costs, several value engineering discussions took place. These resulted in removing a number of finishes and fixtures, and substituting alternate building materials from architect Mike Dowling of Dowling Studio Architects’ original design.

The Ballards, both active supporters of education and healthcare in Montana, had been closely following the campaign. When they heard about the project’s additional costs, the couple pledged their support.

“This donation will allow us to restore the level of quality originally designed into the building,” said Chris Eagan, director of Facilities Services at MSU Billings.

The $1 million allows the university to continue with plans to include research labs, informal learning spaces, and a greenhouse in the facility. The donation also reinstates finishes on features like flooring, and furniture into the project. The university can access these funds after exhausting other state and building funding. Any excess funds after construction is complete will establish an endowment in the Ballards’ name.

Dr. Ballard is well-known for his generosity to the Billings Community. He’s given major financial support to Riverstone Health, Billings Clinic, SCL Health and Rocky Mountain College. Dr. Ballard was instrumental in developing a geology degree at RMC. His company, Ballard Petroleum, employs many of the program graduates.

“When Merilyn and I give to charity, we look for three areas: education, healthcare and the church. We see needs at Rocky Mountain College and MSU Billings, and we want to help the campuses and make school affordable for students,” Dr. Ballard said.

In addition to Carl and Barbara Ueland, the project’s only other million dollar donors, the Ballards’ donation earned the couple naming rights within the building. The MSU Billings Foundation revealed a rendering for the Dr. William and Merilyn Ballard Learning Laboratories, a tribute to their legacy on the first floor of the completed facility. Being especially supportive of students performing undergraduate research for science and healthcare careers, the Learning Laboratories floor is devoted to research labs and classroom space.

Construction on the 30,000-square-foot expansion and renovation began in September. The university expects construction to be complete by June 2021.  The new facility will provide a hands-on laboratory environment, enhance research capacity, increase student enrollment, prepare MSU Billings students for growing high-demand occupations, and attract research-oriented faculty to the institution.

Click here to purchase a personalized and engraved brick, and make your mark on this exciting project. Contact Bill Kennedy, MSU Billings Foundation president and CEO, at (406) 657-1622 or bill.kennedy@msubillings.edu for more information.