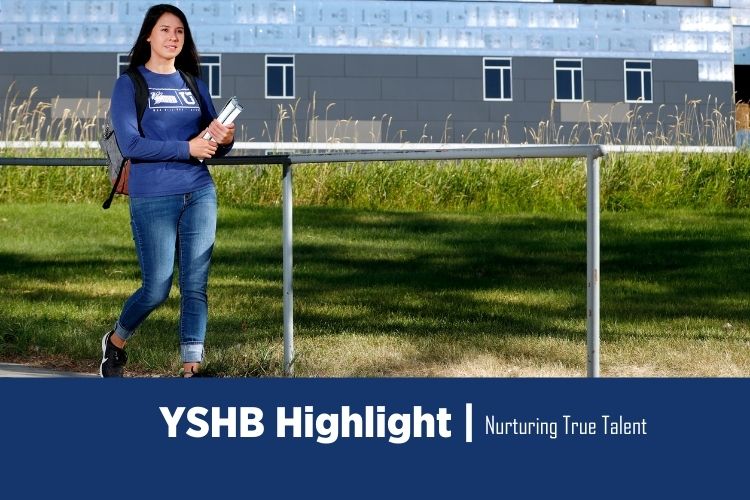 Upon meeting Karrah Peterson for the first time, she is unassuming
and deferential. Yet after a few minutes of conversing, one realizes that
Peterson has lived an entire lifetime in her 27 years. The list of distinctions
to describe her are abundant: Crow tribal member, high school basketball
star, U.S. Navy veteran, non-traditional college student, academic prowess,
researcher extraordinaire, homeowner, volunteer and role model. She is a
family-oriented and community-minded woman with a future – one of the
best and brightest at MSU Billings.

Originally from Hardin, Montana, Peterson moved the three hours away
to Bozeman at a young age. She played varsity basketball for the Bozeman
Lady Hawks, even getting some recruitment looks from colleges.

“My father always had high expectations for me,” she said. “I was an A and
B student.”

One suspects it was mostly As, given her 3.8 college GPA.

Peterson’s dream was to serve her country. After high school, she joined
the Navy in 2011. Her superiors saw her talents, too, putting her through
two years of schooling to learn missile defense systems. She spent four
years on two aircraft carriers, the USS George Washington and the USS
Ronald Reagan, seeing ports of call throughout Asia-Pacific. In 2017, she
discharged from service and returned home.

Transitioning to civilian life, Peterson was open to what her future should
be. She considered law enforcement, encouraged by her mom who works
in the Yellowstone County Sheriff’s Department. But it was a trip to the
morgue that drew her curiosity. She witnessed an autopsy during a ridealong
with officers and began asking questions about that line of work.

“MSUB is close to family,” she said. “It has small class sizes, and I felt like I
could know my professors.”

She was right. Once again, Peterson’s talents were recognized – this time
by professor of biology, Dr. Paul Nash. He approached her about joining in
his vaccine research on the flu, and she was excited for the opportunity.
Their work may one day result in a more effective, longer-lasting flu
vaccine in capsule form.

“Karrah has been invaluable in her contributions to the research
being done in our laboratory,” said Dr. Nash. “She is very proficient,
conscientious, and diligent in all that she does. We would not have been
able to complete what we set out to do without her.”

Peterson’s academic excellence is consistently awarded with Dean’s
Listings, the SALUTE Military Honor Society, and grant awards from
Montana INBRE for her research with Dr. Nash.

When not studying, in class, or in the lab, Peterson volunteers. As a
member of the Native American Achievement Center Inter-Tribal Club,
she assists tribal elders at the MSUB All Nations Powwow. She is also head
coach of a middle school girls basketball team.

When asked about her future, Peterson shares her dream to pursue
medical school.

“I was born in an IHS (Indian Health Services) hospital. It is my intent…
to return to either my tribe’s IHS hospital or another tribe’s hospital to
provide medical care. I want to give back to my community.”

This time – plan your ways to give!