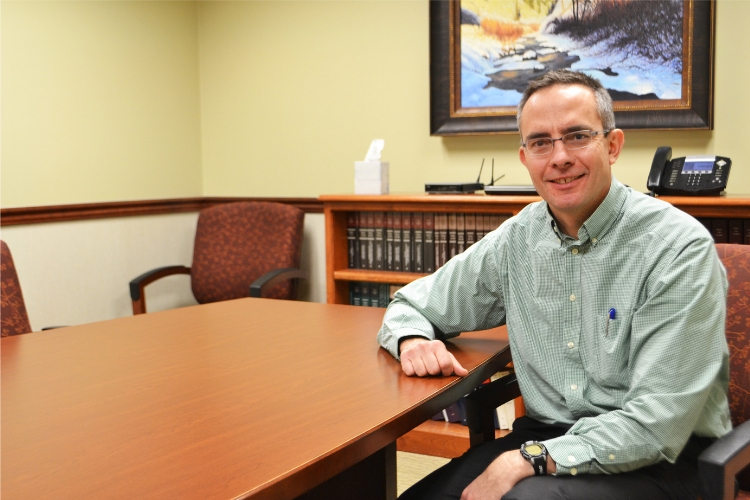 MSU Billings alumnus Nathan Haney let his curiosity lead him to new experiences throughout his life. It’s this curiosity that brought Haney into a law career he never imagined.

Originally from southern California, Haney moved to Billings in January of 1993, following his mother who moved there six months prior. After spending the summer in the Magic City, he decided to attend MSU Billings that fall. As a member of the university’s student senate, Haney noticed something special about his professors and fellow students.

“The teachers were very supportive in everything I did. In combination with that, the students there have a certain work ethic,” said Haney.

In 1996, Haney earned his bachelor’s degree in education. What came next was unexpected, but curiosity led the way.

Haney’s initial plan never involved practicing law, but once his sister applied to law school, he started to consider it. He then applied to the University of Montana.

“I had no perceived notion I would be doing this,” said Haney. “I have always been open to different things, and it’s surprising where your curiosity can take you.”

Haney obtained his law degree from the University of Montana in 1999, followed by a master of law degree in taxation from New York University in 2000.

It did not take long for Haney to start practicing law after graduation. He served as an attorney advisor to Judge Herbert L. Chabot of the U.S. Tax Court in Washington, D.C., from 2000-2002. Then he was an associate and partner of Crowley, Haughey, Hanson, Toole & Dietrich, PLLP from 2003-2007.

These experiences inspired Haney to start a boutique law firm in Billings in 2008, called Karell Dyre Haney PLLP. Since then, Haney has learned a lot as an attorney.

“My line of work takes a lot of time, patience, attention, and becomes pretty demanding,” said Haney. “You have to understand what the client wants even if they do not know what they want.”

Haney’s demanding law career does not stop him from being an impactful member of the community. He is a Eucharistic minister and lector, and serves on the finance committee at his church. He also serves on community and nonprofit boards, along with other committees. Even with his busy schedule, Haney spends quality time with his wife and four young daughters.

Haney’s attitude and drive for people around him caught the attention of the MSU Billings Outstanding Alumni Awards committee. Nominated by several of his peers, he received the Recognition for Exceptional Achievement Award in 2018.

”I have observed Nate balance his life and cannot imagine there is a more deserving individual for this prestigious award than Mr. Nathan Haney,” said Chad Lippert, senior vice president and financial advisor at D.A. Davidson & Co.

“Nate is a people person. He has a way of making people around him feel comfortable and welcome. He is kind and generous with his talents, and no task is beneath him. Nate’s ego is strong enough to give him confidence in his endeavors but is tempered with humility and grace,” said Mary Dyre, a fellow attorney at Karrel Dyre Haney PLLP.

Haney’s curiosity has opened many doors for him, and he hopes current students learn from his experience.

“Maintain curiosity outside of your subject areas,” said Haney. “My experience shows, if I stayed in my subject I would not be doing what I am doing now. You might be surprised what curiosity gives you.”