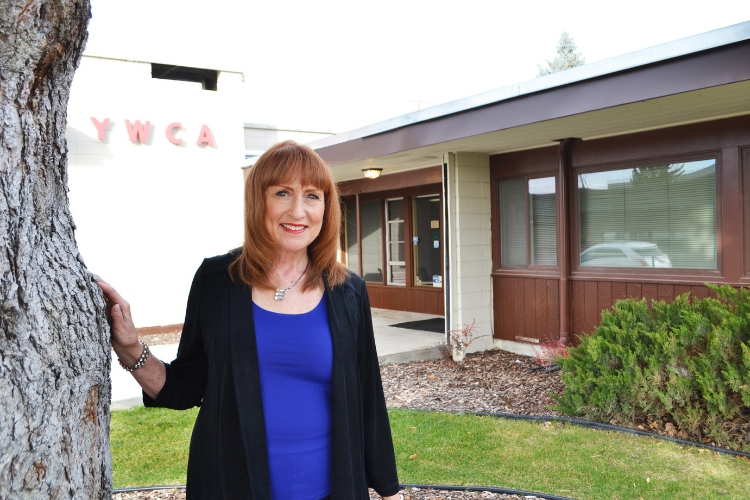 Eastern Montana College alumna Merry Lee Olson has a passion for helping others, and she knows that a helping hand can affect someone’s life drastically. As CEO of YWCA Billings, she’s determined to impact lives in the Billings community.

Originally from the thousand-person town of Basin, WY, Olson moved to Billings as a young child. Her parents wanted her to grow up in a bigger city full of opportunity.

“My family was supportive and believed girls could do what they want to do, as long as doors are open for them,” Olson said.

That support fueled Olson through higher education and a long career, leading her through open doors and into her current role.

Growing up, Olson spent time at what was then Eastern Montana College, attending events with family members, who were students. She remembers going to games the most.

“When the Jackets would play sporting events at Alterowitz gymnasium, I always had a fun time,” Olson said. “Coming from a small town environment, the events seemed so big.”

When it came time for her to choose a college, it was easy for her to decide: EMC was her top choice. During her time at EMC, she acquired essential skills from fellow students and professors, which benefit her to this day.

“I learned many communication skills and realized communication was important,” she said. “I learned tenacity from my peers and also, there’s no such thing as getting lucky. A big part of luck is hard work”.

After earning her bachelor’s degree in education, she earned her master’s degree at Montana State University in Bozeman. She then quickly jumped into the business world.

Olson’s career took her to California, where she ran an international consulting practice and managed a series of projects valued at more than $3 billion. She led strategic planning, developed capacity-building initiatives, created communications plans, and facilitated change management for 21st-century problems. On top of her many responsibilities, Olson also worked for well-known clients such as Nike, Nokia, AT&T, and many other major brands.

While working in California, Olson often traveled home to Billings to assist her aging parents.

“My workplace became the Sky Club in the Salt Lake airport or on a jet,” said Olson. “While being stuck in an airport working one day, I realized I didn’t want to do this anymore.”

Friends of Olson told her about the CEO position at the YWCA. They knew her professional expertise would be perfect for the job.

“When I heard of what the YWCA was trying to accomplish, I realized it was right in my wheelhouse of things I like to do,” Olson said.

Within one year of becoming CEO, Olson led the charge for the YWCA to finance an affordable unit home development. Twenty-four families, who would have otherwise been homeless, now live in those units. This opportunity provided more than a roof over their heads; it also provides job search assistance, financial counseling, and legal clinical counseling.

“That was a life-changing experience for people, and it’s different than putting a roof over their head,” Olson said. “For people to succeed you must make them redirect their approaches, and we’re doing this by giving them a hand up instead of a handout.”

Olson’s passion for people was one of the qualities that caught the eyes of the MSU Billings Outstanding Alumni Awards selection committee. Her nominators had nothing but good things to say about who she is and what she has done. As a result, Olson was awarded the Distinguished Alumna Award in 2018.

“Merry Lee has saved and changed lives through her work at the YWCA,” said Claudia Decker, former member of the YWCA board of directors.

“As a community member, watching Merry Lee lead this organization has been inspirational and impressive. She has such great vision and has elevated the YWCA services and purpose,” said Chris Dorr, also formerly on the YWCA board of directors.

From Basin to Eastern Montana College, to California and back to Billings, Olson ended up creating her path to success. She continues to impact many people’s lives with the work she does. To Olson, MSUB taught her communication is the best tool in life, and she attributes that lesson to her success.