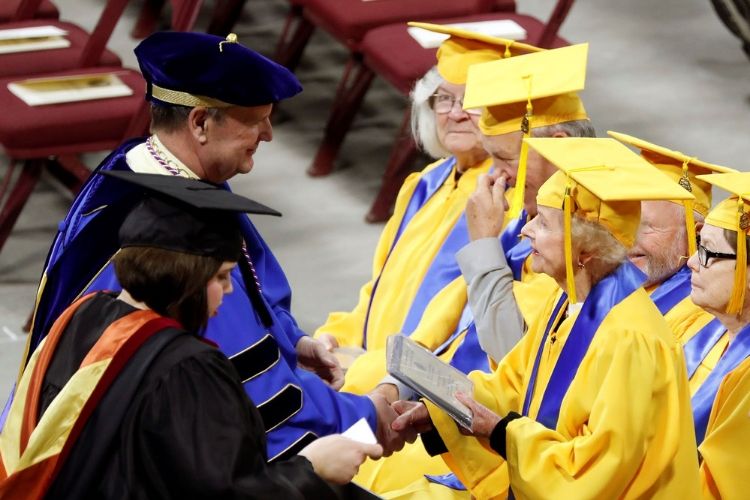 Growing up on a homestead 10 miles from Jordan, Montana, wasn’t easy for Shirley (Stinebaugh) Gruber and her family during the Great Depression.

“We were very isolated,” said Gruber, now 98 years old. “We had neighbors, but the only way we could see them was by horseback.”

She and her eight siblings walked three miles roundtrip to go to school at the North Star Country School each day. She learned about Eastern Montana Normal School from her teachers who had attended there.

“By the time I started high school, my mind was made up to go to that college.” 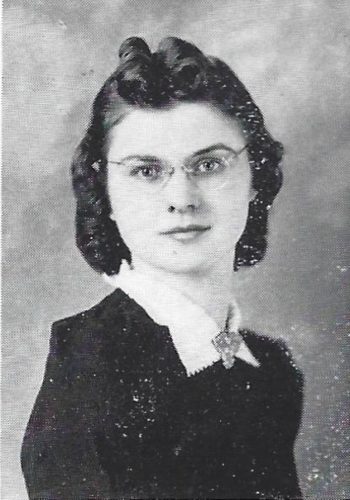 When she graduated from Jordan High School at age 16, Gruber had already saved enough money to pay for the $15 per quarter. She arrived in Billings for school, and began working for families for her room and board.

“When I was there, it was just one building and it was bare all around there,” she said. “That was all there was to the campus. Everybody seemed to realize that it was just the beginning.”

In 1939, at age 18, Gruber graduated with a degree in education. Her relatives were unable to make the nearly 200-mile trek to celebrate with her.

“When I got home from graduation, this lady that I worked for said she had been there,” she said. “I was so pleased that she took time and arranged to be there.”

After graduation, Gruber spent her first year of teaching at a rural school in Toston, Montana. It was there she met an older brother of one of her five students, who became her suitor before work took him to California.

Gruber went on to teach in other rural schools. Then, World War II began. She had met a soldier when she was teaching in Clyde Park, and after months of courting and writing, they married. In 1944, her husband led one of the first troops onto Omaha Beach on D-Day.

“I got a telegram saying he was missing in action,” she said. “A few weeks later, I got another telegram that said he was killed in action, so I knew they had found him.”

She and her young son moved home to stay with her parents, and she went on with her teaching career. In 1945, when she was teaching in Livingston, her sweetheart from Toston came back into her life.

“He said he was still waiting for me,” she said.

Gruber enjoyed 72 years with her husband before he passed away in 2017. They raised seven children together at their home in California, and she worked as a substitute teacher and for the county before retiring in 1992.

In 2019, Gruber received a letter from her alma mater, inviting her to participate in their first-ever Golden Graduates Alumni Program.

“When I got that invitation to go to Billings, it just aroused some interest in me that I couldn’t get over,” she said.

Eighty years after her commencement, Gruber was back in a cap and gown. This time, she donned golden regalia and was honored with a diploma plaque from the chancellor.

“Walking down that aisle and sitting down in the front did something to me,” she said. “Then they called my name and they gave my year of graduation, and I think the people kind of started to listen up! It was the first time I was ever treated like a queen.”

Throughout all of the changes she has experienced, Gruber hasn’t forgotten her roots. She endured homesteading, the Great Depression, and World War II. Including the loss of her loved ones, she survived the hardships of life. She saw her college campus grow from one building to two campuses. And when thinking ahead to 2020 and whether or not she’ll be back for a second round of Golden Graduates activities, all she had to say was, “Maybe I’ll surprise you.”