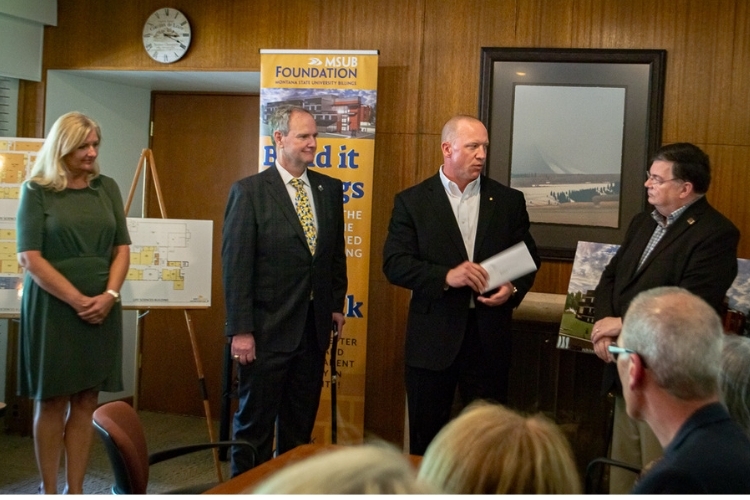 MSU BILLINGS FOUNDATION NEWS—The Yellowstone Science and Allied Health Building at MSU Billings is one step closer to completion thanks to First Interstate Bank. The financial institution pledged $100,000 toward the capital campaign and presented the MSUB Foundation with a check this week.

First Interstate Bank challenged the MSUB Foundation to raise $100,000 from other financial institutions to receive their matching gift. The foundation accepted the challenge and raised the funds before their December 2018 deadline. Other contributors to the challenge include:

“Perhaps our greatest achievement related to this fundraising effort was our ability to collaborate and combine forces with community partners to achieve this goal,” said Kelly Bruggeman, executive director of the First Interstate BancSystem Foundation. “When focus is placed on the collective good — the welfare and success of our community as a whole — that’s when great things happen.”

The foundation hosted a reception on Wednesday, June 19 to celebrate the $200,000 total raised. Chancellor Dan Edelman thanked First Interstate Bank and the other matching contributors for their support.

The capital campaign continues toward an additional goal of $200,000. Last fall, the MSUB Foundation raised $15 million needed to proceed with the project. Construction on the new building is scheduled to begin this summer, with a tentative completion date of January 2021.