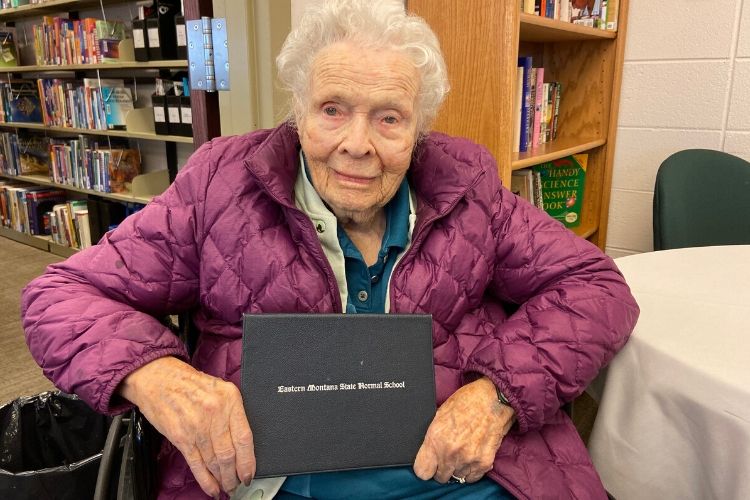 Montana State University Billings has a rich heritage that most have only read about in archived news articles and history books. There are some alumni, however, who can talk about what it was like to attend classes when MSUB was Eastern Montana State Normal School and McMullen Hall was the only building that existed on campus.

One of these past students is Ethel Edmonds Gerard. Gerard was born in 1919, just eight years before Montana saw the establishment of the normal school. She graduated high school in 1937 from Cody, Wyoming, and enrolled at the University of Wyoming. She and a friend decided to transfer to Billings after one year and headed north to attend what is now MSUB. At that time, Billings was the third largest city in Montana, and all of Yellowstone County had a population of 42,000 people.

Now 100 years old, Gerard recalls her time at college in Billings. She remembers walking from the rooming house she and her friend shared with a local family on 31st Street. She even jokes when asked if she had a boyfriend during that time: “Well, yes and no,” she said with a smile.

Gerard was full of laughter reminiscing about her experiences.

The eve of war

In 1941, Gerard completed her two-year teacher certificate program and graduated from Eastern Montana State Normal School. This was the year the original Northern Hotel in Billings was destroyed by fire and the Montana census recorded a 4.1 percent population growth across the state. It was just prior to the Pearl Harbor bombing, which brought the United States into World War II. The normal school saw a sharp decline in enrollment after Gerard received her teaching certificate, dipping to an all-female student body of just 50 students in 1945. Enrollment did not recover until after the end of the war.

After graduation, Gerard returned to Wyoming to teach at a one-room schoolhouse near Cody.

“I got a job teaching the whole building in Sunlight,” said Gerard.

Her classroom consisted of only six children: two second graders, a fifth, sixth, seventh, and an eighth grader.

As soon as Gerard began her teaching career, the war compelled the U.S. government to build 10 camps throughout the western states to relocate and intern Japanese Americans. One of the sites was the Heart Mountain Relocation Center near where Gerard was teaching. The camp was completed in 1942 and held over 13,000 people. It drew local citizens for employment, and Gerard took a position in the administrative offices after her teaching year was over. She worked at the camp through the war and helped with the processing of its closure in 1945.

As the war drew to an end, Gerard met and married her husband, Foard Gerard, who worked in Wyoming’s oil fields. Though her husband has since passed, Gerard still lives in Powell, Wyoming. She didn’t return to teaching after World War II but spent her time raising her three children, volunteering in the community, and becoming a master artisan of hand-woven baskets.