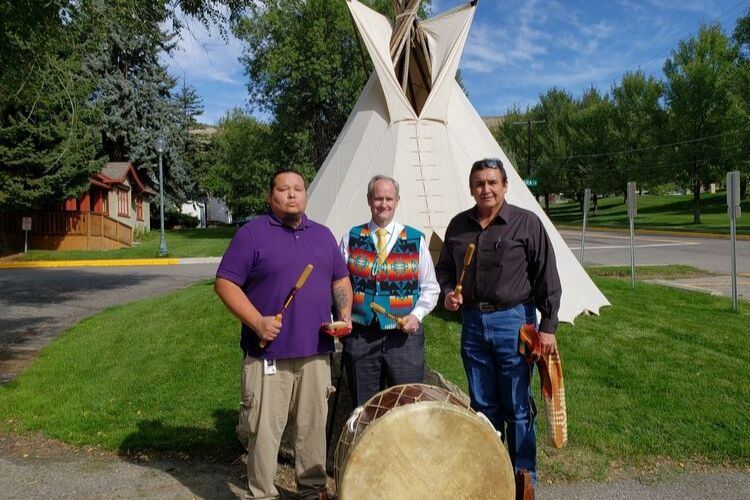 Fitzpatrick said passing the drum to MSU Billings is part of leaving his legacy to his future grandchildren whom he hopes pursue an education at MSU Billings.

“Everything we do as Native people is from the heart. There’s a purpose and a reason why we do the things the way we do,” said Fitzpatrick.

The new drum will be used at the annual MSU Billings Powwow event, as well as singing practices and other ceremonies for Native students, faculty and staff, and community members. Runsabove said that in addition to a drum and its drum keeper, a tioti, or prayer person, flag bearer and spoon keeper are necessary for such celebrations.

“I’d like to see a unity among Native Americans coming together and enjoying their ceremonies and celebrations, and getting an education at MSUB,” Fitzpatrick said.

“[The drum] doesn’t belong to the Native American Achievement Center,” said Runsabove. “It’s being given to MSUB as a whole.”

The donation signifies efforts to strengthen relationships between the university and Montana’s Native community. Joe McGeshick, NAAC tribal liaison, and other administrators seek to grow Native student enrollment at MSU Billings and enhance pathways necessary to increase their retention and graduation rates.

“As a testament to our dedication toward Native American communities across the state, we have been aggressively recruiting and retaining students,” said MSU Billings Chancellor Dan Edelman. “Preliminary evaluation of fall data points to the largest Native student body we’ve seen in a 10-year period prior to my arrival.”

The university is currently compiling official census data for the fall semester.

“I want to thank all of my partners in the Native American community, especially Sidney Fitzpatrick and Joe McGeshick, for their leadership and assistance in achieving this important milestone. This is only the beginning of our collaboration.”