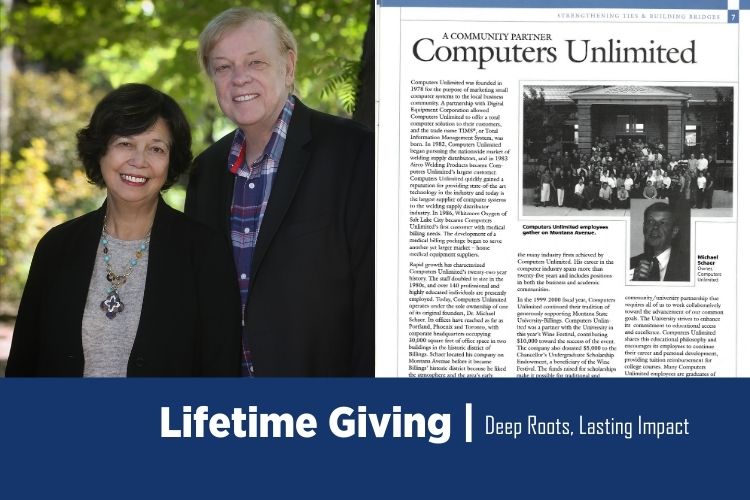 Michael and Cara Schaer embody a lead-by-doing approach to philanthropy. This approach makes them an unstoppable force for good in Billings, Montana. But one might not guess that the Schaers are transplants to the region.

Cara’s hometown is Portland, Oregon. She headed to Oregon State in the fall of 1960 to pursue her bachelor’s degree in business administration and finance. Mike and Cara met at a campus cafeteria. Little did they know, “fine dining” would become a part of their life in the years ahead.

Now a married couple with degrees in hand, the Schaers headed to Montana in December 1964. As new Montanans, Mike joined the chemical engineering department at Montana State University and Cara embraced expectant motherhood. While Mike worked as a professor, Cara delayed her financial career to welcome three children to the Schaer household.

Build it and they will come

In 1978, Mike left his secure teaching career at MSU to start Computers Unlimited in Billings. The self-taught computer programmer and his wife withdrew $3,000 of retirement savings to live on for the year, placing a wager on an industry that was largely unknown.

Mike established roots in Billings’ historic district investing capital in the purchase and restoration of more than a dozen buildings. These ventures helped to establish other businesses, including CTA Architects, NOVA, Carter’s Brewing, and Uberbrew.

The investment was an effort to revitalize Montana Avenue in the late 1990s. He and several other property owners put up half the $1.2 million cost of street work, sidewalks and landscaping. The historical avenue has thrived ever since.

Vision plus action became the Schaer formula for success. In 1994, they put the financial support of Computers Unlimited behind the MSUB Foundation’s Wine & Food Festival by becoming a supporting partner.

“We understand the importance of philanthropic giving, and we are grateful that we can lend a helping hand and assist MSUB provide the access to excellence to it students,” Cara explained.

The festival provides the perfect conduit to raise dollars for scholarships that enable more students to complete their college education.

“Education is the key that can open the door to opportunity,” said Cara. “The wine festival is our favorite event to support and attend in the Billings community. We both enjoy great food and wine, and what better way to enjoy these passions than through the festival and participating in all the special events it offers!”

In 2005, it was Cara’s honor to serve as a Wine & Food Festival co-chair with Evelyn Noennig, shifting from passionate supporter to mission-driven organizer.

While the Wine & Food Festival might be their favorite event, the Schaers have readily shared their skills though many other community initiatives.

Since retiring in 2002 following a successful 21-year career in financial services, Cara has remained active in the Billings community. She has volunteered on various boards, including the Yellowstone Art Museum, YWCA, Billings Depot, Billings Library Foundation, and The Transition Network. During her tenure as president of the Library Foundation, Cara was actively involved with the capital campaign and the building project for the new Billings Library.

Together, the Schaers look forward to continuing their support of the Wine & Food Festival and MSU Billings.

“While the campus and faculty may be small in size, the programs offered and quality of instruction given both provide huge dividends to the students that provide a strong foundation for them to build successful professional careers,” Cara said.

This time – plan your ways to give!