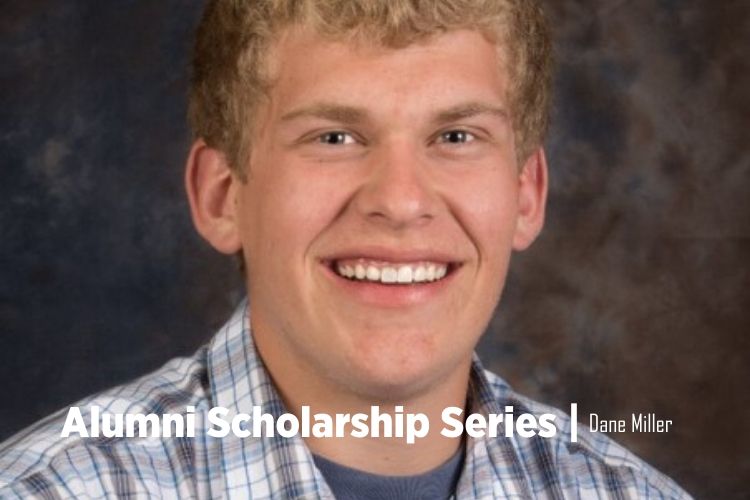 As a teenager, MSU Billings sophomore Dane Miller learned the ins and outs of business. Dane earned compensation for his work on his family’s farm. The unique currency – winter wheat.

“I enjoyed working hard and getting my pay in grain,” Dane said. “It gave me business experience, like learning when to sell the grain to make the most profit.”

This early, micro-level business entrepreneurship, coupled with his rural upbringing, informed Dane’s perception of the value of hard work and education. Dane’s parents, Dave and Julie, both Eastern Montana College alumni, have emphasized education since their daughter and triplet boys were young children. All four Miller children are students at Montana institutions of higher education.

“Being a farmer is not easy; sometimes it requires supplementing,” Julie said. “My husband and I have always explained to the kids that they need their education to fall back on.”

Dane belonged to Business Professionals of America at the area’s consolidated North Star High School in Rudyard, Montana. He set a goal during his freshman year to place in a BPA event and attend a national conference. Dane achieved that goal as a sophomore, becoming the state champion in the payroll accounting division. That year, he attended BPA’s national convention in Boston, Massachusetts.

“He is hard on himself, but he has always been very academically inclined,” she said.

Dane is using that studious behavior to further his education. He spends an average of 15 hours each week doing homework for his five classes to maintain his 4.0 GPA. Dane is studying to become a CPA, with plans to move back to the family farm in Gildford, Montana – following in the footsteps of his father, who also studied to become a CPA at EMC.

“I feel like we did something right,” said Julie of Dane’s decision to follow in his father’s footsteps. “He must see merit in how he was raised.”

Dane always had an affinity for MSU Billings, beginning with his first visit to the campus bookstore at five years old. Julie said almost every visit to Billings included a stop at the university and its bookstore. He later attended BPA conferences hosted by the university. Dane considered several colleges during his senior year of high school but found the right fit at MSU Billings.

“The campus was smaller and more intimate,” Dane said. “I felt like I would get a highly personalized experience at MSU Billings.”

Dane said he is grateful he doesn’t have to worry about working a full-time job while going to school full time. Dane focuses on studying instead of making money for school, which he credits to his scholarship package. The package includes the renewable MSU Billings Alumni Association Endowed Scholarship.

“Receiving the alumni scholarship is meaningful for me,” Dane said. “I was able to qualify because both of my parents are alumni, which is special, and it makes me want to work harder and be successful.”

The MSU Billings Alumni Association established the scholarship in 1983. MSU Billings Foundation Scholarship Officer Jennifer Ries said the award has paid out nearly $110,000 throughout its existence. The criteria are rigorous and limited to four University Campus and two City College students each year. The recipients can renew their scholarship for the duration of their program but must maintain a 3.0 GPA to requalify.

Dane said he appreciates that when he moves back to the Hi-Line after his CPA studies are complete, he won’t take a tractor-load of debt with him. Instead, he’ll be able to focus on working on the farm with the rest of his family.

This is one story in a three-part alumni scholarship series by Laie Black, public relations assistant for the

The Show Must Go On for MSU Billings Students

Learn More about Your Estate

Gratitude from a Graduate