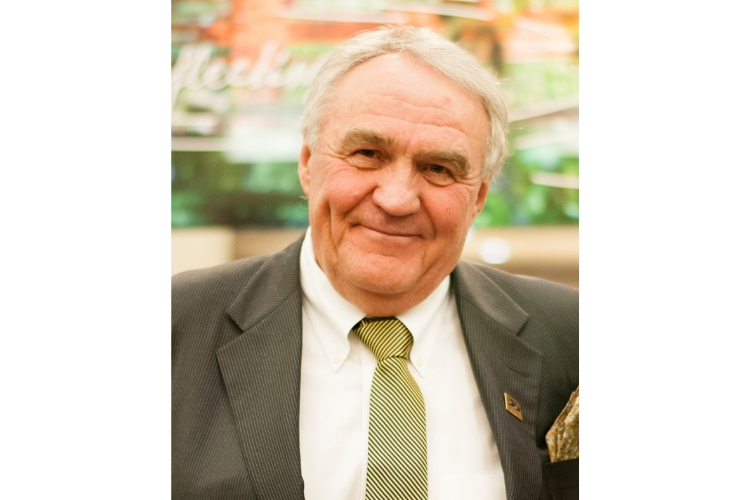 Carl Ueland represents what education is: gaining knowledge, skills and experience, and then applying it to improve one’s life and the lives of others. Since graduating from Eastern Montana College in 1970, Ueland has impacted countless lives through his extensive agricultural business endeavors and tremendous philanthropic support for his community and alma mater.

Ueland’s desire to make a difference started at EMC, and it continues today with the students of MSU Billings. From investing in student scholarships and the new Yellowstone Science and Allied Health Building, to addressing the class of 2019 as the MSU Billings Commencement speaker, his Yellowjacket pride extends to MSU Billings and beyond.

Ueland built a successful career after earning a biology degree with a minor in chemistry from EMC. That success took him from working for Westchem Agricultural Chemicals in Montana, to the state of Washington, where he met his wife, Barbara, and eventually to Fresno, California.

In 1987, Ueland moved to Fresno to become president of United Agri Products of California and Arizona. He grew that business to more than $200 million in sales before leaving his position in 1999. It was then that Ueland became president and part owner of Actagro LLC. Actagro is a premier developer, manufacturer, and marketer of environmentally sustainable soil and plant health technology solutions. The company developed an innovative delivery system for fertilizers used on food crops, such as corn, wheat, almonds and grapes, which increases the fertilizer’s effectiveness. Actagro went global in the 2010s, and Ueland retired in 2013.

Though his career led him away from Montana, Ueland’s deep roots continue to have an impact at home.

Ueland is a native of Butte, Montana, where he grew up on a cattle farm. There were eight kids in his family, and when it came time to pursue higher education, they took different directions. Ueland’s twin sister and an older brother graduated from University of Montana, and other siblings attended Montana State University in Bozeman. But Carl and his brother Ray enrolled at what was then Eastern Montana College.

“I kind of followed him there,” Ueland said. “I like the town of Billings. Back then, Eastern was a growing college, and it was exciting to go there.”

During his time on campus, Ueland was a member of the varsity track team, the EMC Letterman’s Club, and the student legislature. In 1970, he served as a senior class officer. He said the setting, professors, class sizes and social activities all contributed to his educational achievements.

A man of merit

In recognition of his academic journey and the success that followed after his graduation, the MSU Billings Alumni Association recognized Ueland with an Outstanding Alumni Award in 2016. Honored with the Alumni Merit Medallion, the association honored Ueland for his dedication to the advancement of education.

As his company and success grew, so did Ueland’s ability to give back. He and his wife are avid supporters of MSU Billings, having donated nearly $1.5 million to the MSU Billings Foundation over three decades. Their philanthropy supports scholarships for student athletes and science majors, and includes significant contributions to the new science and allied health facility on campus.

“It’s obvious we need a new science building,” said Ueland, reflecting on his own time as a science student in the current structure. “I have always been very fond of Billings. I loved my time here when I grew up.”

Just as Ueland has experienced lifelong benefits from his education at Eastern Montana College, so will the students of MSU Billings experience the benefits of the Uelands’ generosity and Yellowjacket pride for generations to come.